At the HBSC Autumn Meeting, representatives of the 50 member countries presented the results of the 2018 survey and prepared the next survey round. Caroline Residori gave a presentation on „The health, well-being and life satisfaction of young people in Luxembourg before the COVID-19 pandemic and during deconfinement“ and Andreas Heinz showed how difficult questions can be identified during data entry. Trends from 2006-2018 in Health, Health Behaviour, Health Outcomes and Social Context of Adolescents in Luxembourg This report shows how 30 health indicators developed in the four Luxembourg HBSC surveys conducted in 2006, 2010, 2014 and 2018. There were positive trends especially in the health behaviour of the pupils: they smoke less and drink less alcohol. They also report more frequently that they brush their teeth regularly, eat more fruit and fewer sweets and consume fewer soft drinks. From 2006-2018, however, there were also deteriorations. For example, more pupils feel stressed from school and rate the climate among classmates worse. In addition, there are more pupils who are overweight and exercise less and more pupils report having psychosomatic health complaints. 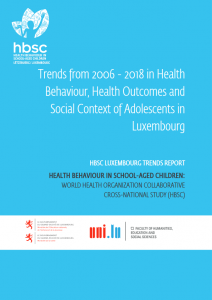 Suicidal Behaviour in Youth in Luxembourg – Findings from the HBSC 2014 Luxembourg Study Suicide is one of the leading causes of death among young people worldwide. In order to prevent suicides, early identification of groups at risk is needed. In the Luxembourgish HBSC study, data on suicidal behaviours among adolescents were collected in 2006, 2010 and 2014. These were used to identify suicide risk factors in order to prevent suicides. Today the special issue of the Journal of Adolescent Health on the 2017/18 HBSC study was published. Authors of the Luxembourg HBSC team contributed to three articles.

“Intersectionality and Adolescent Mental Well-being: A Cross-Nationally Comparative Analysis of the Interplay Between Immigration Background, Socioeconomic Status and Gender” Informed by an intersectional approach, the article deals with the interplay between immigration background, socio-economic status, and gender in shaping adolescent mental well-being. The first aim of the study was to assess whether membership in multiple disadvantaged social groups (for example being an immigrant girl with a low socio-economic status), in line with multiple jeopardy hypothesis, had an aggravated, rather than simply cumulative, negative effect on adolescent mental well-being. Cognizant of the importance of national level factors (such as income inequality, gender inequality and immigration and integration policies) in mitigating or exacerbating health inequalities, the second aim of the study was to assess whether these factors facilitated or hindered such an effect. Employing new and innovative methodology, and making use of the large and diverse sample offered by the 2017-18 HBSC data, the study could show that multiple jeopardy hypothesis can be maintained for less inclusive and equal countries but should be rejected for their more equal and inclusive counterparts.

“Patterns of Healt-Related Gender Inequalities – A Cluster Analysis of 45 Countries” The paper explores gender inequalities between 45 countries across 10 health indicators among 15 year-olds and whether those differences in health correlate with gender inequality in general. The cluster analysis reveals systematic gender inequalities, as the countries can be divided into seven distinct groups with similar gender inequality patterns. Luxembourg belongs to cluster 2, i.e. the health inequalities between boys and girls in Luxembourg correspond to the average of all countries. In other words, neither boys nor girls are particularly disadvantaged concerning specific health indicators. For eight of the 10 health indicators, there is a negative correlation with the Gender Inequality Index: the greater the gender equality in a country, the higher the odds that girls feel fat, have low support from families, have low life satisfaction, have multiple health complaints, smoke, drink alcohol, feel school pressure, and are overweight compared with boys. Four indicators show a divergence: the higher the gender equality in a country in general, the larger the differences between boys and girls regarding life satisfaction, school pressure, multiple health complaints, and feeling fat.

The Special Issue can be found here.

WHO Regional Office for Europe published the recent International HBSC Report „Spotlight on adolescent health and well-being“ with Volume 1 on key findings, Volume 2 on key data and a summary.

The International Journal of Environmental Research and Public Health published our paper School-Class Co-Ethnic and Immigrant Density and Current Smoking among Immigrant Adolescents.

A methods workshop on surveying sensitive topics was held at the University of Luxembourg on 15 January. We are very grateful to the speakers Ársæll Már Arnarsson (University of Iceland), Alexander F. Schmidt (Johannes Gutenberg Universität Mainz), Ines Keygnaert (Ghent University), Alina Cosma (Utrecht University) and András Költő (NUI Galway)  and the guests from the Ministry of Education, Children and Youth and the Ministry of Health and our colleagues from the University who contributed to a very valuable exchange of thoughts.

At the EPH conference, Claire van Duin will give a lecture Using data from the HBSC study for evidence-based suicide prevention in Luxembourg in the seminar „How can data on adolescents’ health behavior contribute to public health policies? Lessons from HBSC“ chaired by Emmanuelle Godeau. Claire will also present a poster on Adolescent suicide behaviour profiles: comparing unplanned attempts, planned attempts and ideation.

Carolina Catunda took part in the Autumn Meeting in Yerevan, where she co-chaired the meeting of the Mental Health and Well-being Focus Group.

On September 4th she presented a Poster entitled “Communication with father and mother differently impacts suicidal behavior”. The next day she was part of a Symposium entitled “Europe’s illicit drug use challenges: are health psychological, social and policy responses fit for purpose?”, where she presented “Trends in cannabis consumption among youth in Luxembourg” using HBSC data. The abstracts of the poster and the lecture can be found in the EHPS 2019 Book of Abstracts. 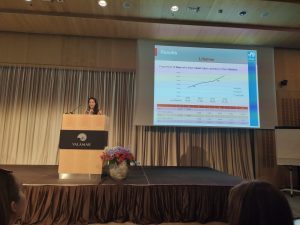 The Journal of Affective Disorders has accepted our paper „Suicide Prevention: Using the Number of Health Complaints as an Indirect Alternative for Screening Suicidal Adolescents“. Das Thema des Vortrags von Andreas Heinz war “Are you a boy or girl” – Who are the non-responders?“ Am 15. August wurde der Artikel „The Association between Cyberbullying, School Bullying and Suicidality among Adolescents: Findings from a Cross-National Study on Health Behavior in School-aged Children (HBSC) in Israel, Lithuania and Luxembourg“ in der Zeitschrift CRISIS veröffentlicht.